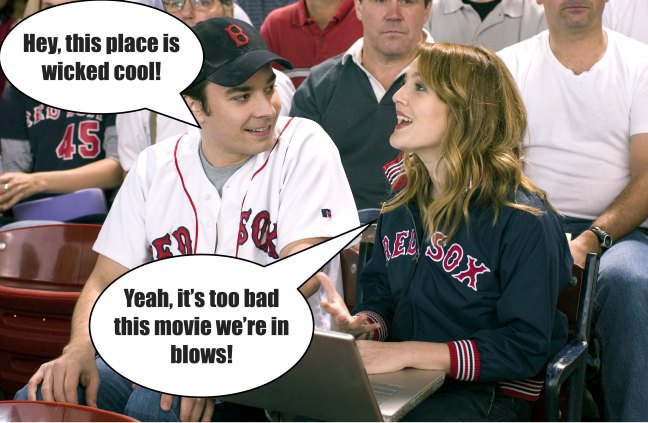 I travelled to Boston this weekend, and here’s a little spoiler. Doesn’t suck! I know a lot of us moved away to the big, super cool city and were like “Oh, Boston is lame. It’s all just Irish pubs that don’t stay open past 1am.” But that’s not true. Well, not entirely. First of all, who the fuck is staying out past midnight anymore? Not this guy! The NBA finals start at 9 each night and it makes me want to die. I’m all about day drinking then getting 8-plus hours of sleep. AND THEN having my Sunday.

Also, not just shitty Irish pubs anymore. Sure, the Black Rose is still there. But the beer scene is off the chain. Honestly, craft breweries are so prevalent these days, it’s hard to find a town that doesn’t have a decent craft beer scene. That said, I had some great, great beers in Boston. They even have good shit at Gillette Stadium. Sure, it costs $17 and comes in a “novelty” cup that is just a green silhouette of a soccer player kicking a blue ball on a yellow background and doesn’t even mention Brazil or Copa America. But, the again, so do the Bud Lights.

The food was delicious too. Gone are the days of paste-like clam chowder. We had some nachos with blue crab all over them that made me want to tear my shirt off they were so good. Just go Hulk Hogan all over that place. Leg drop a morherfucker through a table.

And all these cool things that happen in New York? I can’t do them because the other 700 million people who live here are doing them too. Nothing like hearing about something that’s the best ever, then waiting in line for 13 hours to tell me their sold out of deep fried sneakers.

The T is still really small and slow. But at least you can recharge your Charlie Card on the internet.

Tanya and I had basically the same team of Now You See Me 2 ($22.4M), Me Before You ($9M) and 5 Alice Through the Looking Glass(es) ($5.6M). The only difference was I had a second Me Before You and Tanya went with Captain America: Civil War ($4.3M). Alice ended up being the best performer of the weekend, which added $10M to each of our scores. I’m leading Tanya by about $46M at this point. I just have to not pull a Golden State Warriors at this point and blow this at the end.

Danielle and Danny* both brought in $66M going with a Now You See Me 2, Warcraft ($24.2M) and Me Before You tandem. Liz and Jenny* were only $2M and $4M back, respectively. Andy had a solid team of good value movies, playing Me Before You three times and Alice twice, but didn’t have a heavy hitter like Now You See Me or Warcraft.

The real question is what happened to Sean. Look at Sean’s team:

Teenage Mutant Ninja Turtles 2 ($14.4M) only cost $224 Bux last week. Captain America 3 cost $60 Bux, used twice is $120. I don’t know how much The Lobster costs anymore, but it couldn’t have been $656 which is how much money Sean had left after picking those three movies. What the hell happened? Did he realize that he’s been in last for many past seasons, so he just sabataged himself to keep the status quo? Did the power go out as he was submitting his lineup? Did Liz get caught up in the competition and hack into Sean’s account*? Did he get attacked by a dinosaur? Did he get attacked by Chris Pratt? Let’s hope so

*This is why I don’t let Jen play

This week is ridiculous. Ridiculous. I want to see both of these movies and they both look great. They both look like they could make a ton of money and together they both cost more than $1000 Bux, which means you can’t own both of them at the same time. It’s time to see which corner you’re on. Pixar or The Rock?

I have so many mixed feelings about this movie. One the one hand, Finding Nemo is a perfect movie. Original, funny, moving. It’s amazing. It scored a 99% on Rotten Tomatoes. I actually looked up the one bad review on RT and the one complaint is, “too kidsy” So I felt there’s no need to make a sequel.

On the other hand, apparently this movie is as perfect as you can get without being Finding Nemo. Right now it rates at 95%. Any of the negative reviews echo my hesitation for why their doing a sequel, again claim it’s too kidsy, or are taking themselves too seriously.

Finding Nemo opened to $70 million. But Finding Dory is going to do much, much better than that. Pixar sequels have all increased their opening take over their predecessors by anywhere from to 10% (Cars 2) to 96% (Toy Story 2). Estimates have Finding Dory breaking the record for largest opening weekend by an animated movie, a record currently held by Shrek the Third with $121.6 million. Fandango reports have it already as the top pre-sold animated movie of all time, beating out Minions. Finding Dory is now the most Fanticipated™ animated movie of all time*. Box Office Mojo estimates it’ll make $124 million, and Box Office Pro estimates $131 million. Let’s average those together to say $127.5 million. Even at Dory’s stiff price of $885 Bux, it’s still a $144k per Bux average. If this breaks all kinds of records, you’ll be kicking yourself for not taking it, even if it means you can’t pick The Rock and Kevin Hart. By the way, if you take this you have $115 Bux left and seven slots. Don’t leave slots open! The Nice Guys, looking to make around $1M, at $7 Bux is a good cineplex filler-outter.

I’m so in on this movie, it doesn’t even matter if it’s good or not. Reviews are mixed to good-ish, coming in at 60%. Many of the reviews fall into the “I can’t believe I enjoyed myself,” “Dumb but really fun,” “Wait, The Rock is funny?” or “Turn your brain off and enjoy” category.

This is by the same director as We’re the Millers, which made $26 million in it’s opening weekend, but did really well in following weekends, never losing more than 40% from the previous weekend. That means it gained buzz as it went, wasn’t as bad as it looked, and people saw it multiple times. This bodes well for Central Intelligence. Also boding well for this movie is Kevin Hart. People love that tiny man. 4 out of his last 5 movies have averaged almost $30 million in their opening weekend.

Also, this movie’s tagline of “Saving the World takes a Little Hart and a Big Johnson” is pretty much the best tagline since 1997’s Volcano with “The Coast is Toast.”

Both Box Office Mojo and Box Office Pro put this one in the $34-$35 million range. At $225 Bux, that’s an average of $156k per Bux. Uh oh, does it make more sense to load up on 2 or 3 Central Intelligence(s) than to take Dory? Make your decision quickly. Cineplexes are locked at noon.

Have a great weekend!!

Shade of the Week